In this Throwback Thursday, Sunny talks Spring gardening in 2009.  For more garden tips, check out her edible gardening tips on Miraclo-Gro and watch videos here.

For the last few years or so, I’ve wanted to have an herb garden. I’ve thought about it, daydreamed about it and talked about it. I know indoor herb plants are just as good, but I wanted a garden, you know … one you work in and get all dirty and stuff. Not very eloquently said, but I’m willing to guess I’m also not your typical stereotype for a gardener. At least I don’t think so … we are given some pretty clean images of people gardening. In commercials the women have on cute little khakis and a denim button up, thrown over a white tank or something. The shoes are clean and the gloves, pristine. Can I even say the people usually seem older? I’m 34, for the record. In magazines, gardening is even prettier … the gloves are clean and tools are shiny with only dirt on the part touching the dirt. Reminds me of how fast food looks in commercials … it never adds up in real life. That being said, I thought starting a garden would be pretty and easy and breezy lol … it isn’t.I recently moved into a place with a nice patch of earth in the backyard. It may seem tiny, but in Brooklyn, it’s golden to have any outdoor space. I lucked up and got more than the standard concrete found in many of the borough’s backyards, I got dirt … and lots of concrete as well. Everything was covered with years and years of neglect and junk. A definite fixer-upper of a backyard. When we finally decided we were going to tackle it, it coincided with the first days of spring, so why clean it if we aren’t gonna use it? I immediately turned an idea of my own herb garden, into a full-on garden of veggies and fruits as well. I ordered some seeds and bulbs online, then when they got here we took a trip to Home Depot for the rest. First, I’m never an advertiser of stuff here, just a talker telling a friend a story, but you must know the Home Depot I go to … we call it “TheBizarro-World Home Depot” (taken from a favorite Seinfeld episode). We call it that because typically I’m used to going into one and searching forever for something and not being able to find anyone to help and when you do find someone chances are they are tied up with another customer. One time I waited about 40 minutes in the appliance department trying to buy something. I ended up getting it at a locally owned store. Now in the new ‘hood I thought I’d give the old standby another try. Look, I know the aisles have headers and all, but there are just some things you need help with. So, anyway every time we go in there now, there are more than enough people to help and twice, we didn’t need help, we were just comparing products and someone asked if we needed help deciding. Really nice. We commented at checkout how nice everyone was and we weren’t used to it and the guy that checked us out said with a smile, “We aren’t trying to see a recession happen over here!”. It was lay-off, recession humor that was needed. As I am experiencing growth, I have many people very close to me dealing with layoffs. It sucks and I hope soon things turn the corner on the economy. Oddly, if you have some earth close by and a few bucks, you can start a garden and work off some of the stress. Yes, it’s a workout and it’s cheap! Seeds are like $1 for a bag of them and topsoil is cheap and so are the tools. All I bought was a hand shovel and a hand-axe/rake thing. There was already a shovel left behind by the last folks, so not really much to upstart the garden. Just plenty of planning and running around.

That’s another thing they don’t show in the ads or magazine articles about gardening … it’s a workout! Here I am, halfway through raking … 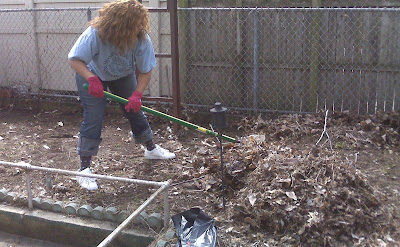 Don’t laugh at the gear, I’m no slope bunny. I don’t have the khakis and the cute stuff. Look at that mess though! There was junk under those leaves from years ago. Really yucky, but we had a garden to sow! My dude was such a champ and knows plenty about landscaping and stuff so I had an advantage. We had to turn the soil because it was rock hard and filled with junk, here I am getting that done. 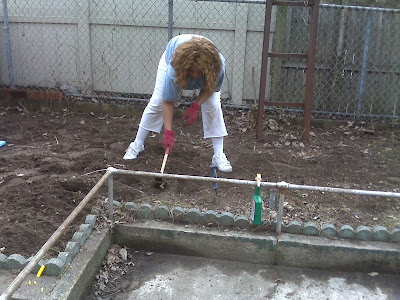 This is a bit later in the day so I had to change because it was cold and I found jeans just don’t feel comfy in the garden. Even though we were sure to be past the last frost, it was cold. This was only two weeks ago. I didn’t work alone, I had the hand tool and my dude wielded the bigger ones to remove the weeds and stuff. There were all kinds of roots down there. Ick. After we turned it and mixed in some new soil we decided to take a break and start plotting what seeds would go where … we also needed some refreshment. 🙂 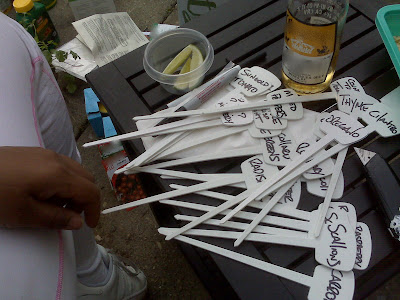 Okay, so you know how it goes when kids are in the car on a road trip the question is always “Are we there yet?”. I was that annoying kid to my dude while we were turning the soil. Because even after our lunch break after turning soil for hours, he said we needed to turn it some more. I’d work for about 10 minutes and ask him “Can we start yet?”, “Are we there yet?”, “How far away are we?”. LOL. Ahhh he handled it well because I can be a whiner, but finally when all things were turned, I got to sow the seeds! 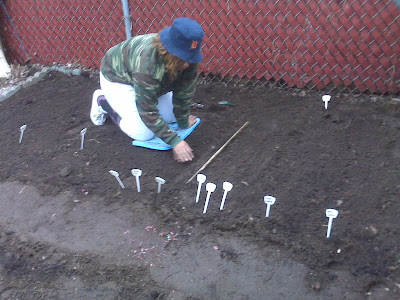 I was so engrossed, I didn’t even notice him snap these flicks. I told him to get pics of me raking, but that was hours before this. Anywho, there’s red onions, carrots, radishes, scallions, 3 kinds of lettuce, collards, cucumber, watermelon, tomatoes, broccoli, rosemary, thyme, oregano, bell peppers and cilantro. Not all went directly into the ground. I did a mini greenhouse inside for a backup to the watermelon I planted outdoors, then also planted the peppers and backup seeds of the collards and radishes in the container as well. I just wasn’t quite sure the seeds would last and from research knew starting indoors was a good idea for some seeds. Here they are a few days in … 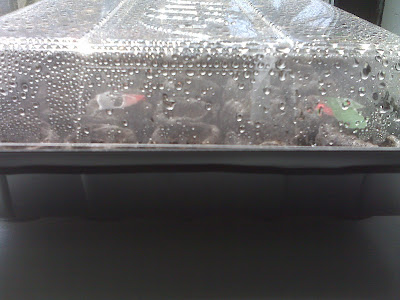 I was nervous until … 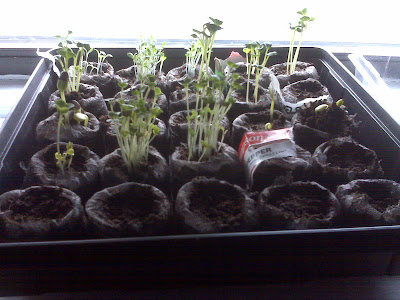 … these sprouted up a few days later! Those are watermelon, collards and radishes. In the front are the pods for the bell peppers — slow starters. Also, any other gardeners get giddy every morning like it’s Christmas or what?! Because after sowing the seeds into the ground outside, I couldn’t wait to wake up every morning and check out the window for overnight progress. I wanted to blog about it two weeks ago when I planted everything, but I thought that would be boring. A flick of a patch of dirt. Not so neat, but now … I have some green out there. Take a look at my radishes! 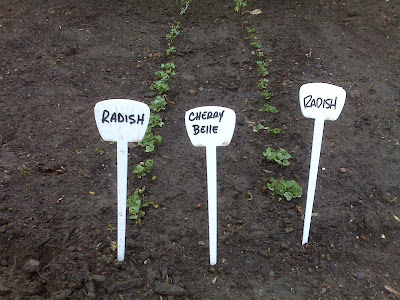 They were the first to sprout and the funny thing is I just got over mydislike of them! Cute and ironic twists the world throws us. Take a look at the collards, on the left are the ones sown directly into the soil, on the right are the transplants. 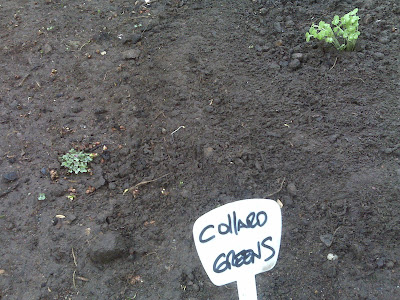 Unfortunately, the watermelons I planted outdoors were killed by weeds. We don’t even know how we missed the huge weed bulb because as I mentioned, we turned until turning couldn’t turn anymore. We investigated the soil around the watermelon seeds and found a bud sprouted and ate up all the nutrients from the seeds. There were teeny little weak watermelon sprouts in the hill I built. Like anemic versions of the ones grown indoors. Darn weeds! No worries, we transplanted the backups from indoors and rebuilt the hill for them. 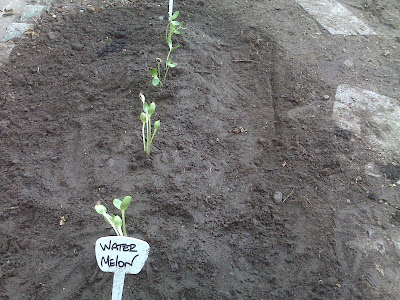 That’s where I’m at now, just waiting to see if the implanted stuff takes outdoors. Then I have to thin stuff. I’m starting to feel like I need a journal to note what to do to each crop, it’s hard to keep in my head. Another thing, I’ve never checked the weather report so much in my life! Btw, the herbs I mentioned for the garden aren’t seeds, they are plants and I actually haven’t put those in the earth yet. Waiting for better weather. If the weather warms up as promised, I hope to tackle that sometime this weekend along with some flowers in other areas of the backyard. Stick around for garden updates and I still have BK Restaurant Week stuff to post soon.

Get more garden tips at Miracle-Gro, and be sure to check out Sunny’s Miracle-Gro videos!

Throwback Thursday: Ever Wondered What Happens At The Sonic Drive-In Convention? Well, Here’s What!